Robert Sale-Hill’s poem, The True Origin and History of “The Dude” (The New York World, January 14, 1883) introduced the world to the word Dude, and kicked off a full-on Dude craze. A-Dude-a-Day[i] Blog is dedicated to preserving and sharing pics, pieces and poems from the early days of the Dude-craze of 1883. You can read more about the history and origin of the word Dude on my blogpost, "Dudes, Dodos and Fopdoodles" on my other blog, Early Sports 'n' Pop-Culture History Blog.

Dude #1 - The True Origin and History of "The Dude" 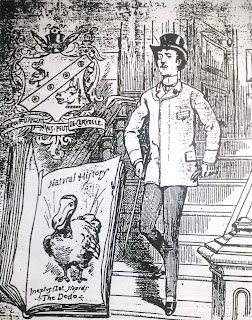 ‘The True Origin and History of "The Dude"’

‘[The following "pome," somewhat inscrutable” by THE WORLD. is published as of probable interest, "to whom it may concern," like A. Lincoln’s Niagara letter to Horace Greeley]:


Long years ago, in ages crude,
Before there was a mode, oh!
There lived a bird, they called a "Dude,"
Resembling much the "Dodo."

Its stupid airs and vanity
Made other birds explode, so
They christened it in charity
First cousin to the "Dodo."

It plumed itself in foreign plumes,
And thought home products no-no
For idiocy it ranked with "Lunes,"
And hence surpassed the "Dodo."

When Darwin’s theory first saw light,
"The Dude" he tried to think of,
But monkeys being far more bright,
He made the missing link of.

Now lately in this hemisphere,
Through some amalgamation,
A flock of Dudes, I greatly fear,
Are added to our nation.

In form and feature rather young–
Somewhat resembling man, sir–
They flit about and speak a tongue
That is not worth a d–n, sir.

Their features, first I would explain
Are of the washed-out order–
Mild dissipation, feeble brain.
With cigarette smoke border.

Their feathers o’er their brow they bang,
Their cheek resembles leather;
Their style, inclusive, is in slang.
The "Strike me with a feather."

Their father’s cuff supports a hat–
The head just seen between them;
A coachman’s riding coat at that
Envelopes all and screens them;

Save just below the coat is seen,
Where muscles ought to be, sir,
A pair of pipe stems, cased in green,
Skin-tight and half-mast high, sir.

To this please add a pointed shoe,
Verandas built around it;
A necktie, either white or blue,
C’est fini, if you doubt it.

Just take a walk some sunny day-
Be sure the wind’s not high, sir,
For in a breeze they dare not stay
Before they’ve learnt to fly, sir. —

And there in flocks upon the ave
For ladies they’re but slim beaux,
You see them flitting o’er the pave,
With arms—or wings—akimbo.

They have their nests, also a club,
Alas, so misapplied, sir,
Like other birds they love light grub,
For beef’s to them denied, sir.

Of stairs their club-house has no need,
For, entering the hall door,
They take a long breath and with speed
Float upwards off the hall floor.

And soaring up are caught with nets
With ribbons held together,
And after being nursed, the Pets
Are blown home on a feather.

They hardly breathe, they are so light;
A smile their coat it creases,
And one who laughed the other night,
Was carried home in pieces.

They do not care for cruel sports,
Like foot-ball, cricket, gunning,
But lemonade they drink by quarts,
Their girling’s "real stunning!"

The Brush Electric Lighting Co.
Have cased their lights in wire
For fear, attracted by the glow
They’d set their wings on fire.

Imported "Dudes" are very shy
Now "Oscar’s" crossed the ocean.
But native "Dudes" soon learn to fly
And seem to like the notion.

If they would only fly away
And settle out in China,
Give us the chance, the girls will say
To hunt up something finer.

America can ill afford
To harbor such deformity,
And we would humbly thank the Lord
To spare us this enormity.

— ROBERT SALE HILL
Posted by Peter Jensen Brown at 10:37 AM