Robert Sale-Hill’s poem, The True Origin and History of “The Dude” (The New York World, January 14, 1883) introduced the world to the word Dude, and kicked off a full-on Dude craze. A-Dude-a-Day[i] Blog is dedicated to preserving and sharing pics, pieces and poems from the early days of the Dude-craze of 1883. You can read more about the history and origin of the word Dude on my blogpost, "Dudes, Dodos and Fopdoodles" on my other blog, Early Sports 'n' Pop-Culture History Blog.

In Robert Sale Hill’s original “Dude” poem, “The True Origin and History of the ‘Dude,’”[1] he portrayed “Dudes” as being thin, light, weak and not fond of sports.

They hardly breathe, they are so light;
A smile their coat it creases,
And one who laughed the other night,
Was carried home in pieces.

They do not care for cruel sports,
Like foot-ball, cricket, gunning,
But lemonade they drink by quarts,
Their girling’s "real stunning!" 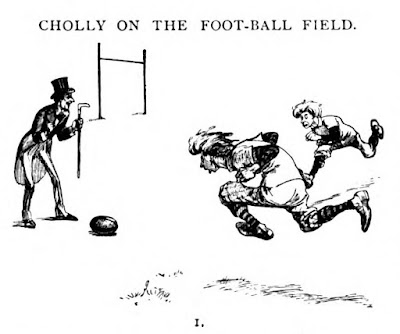 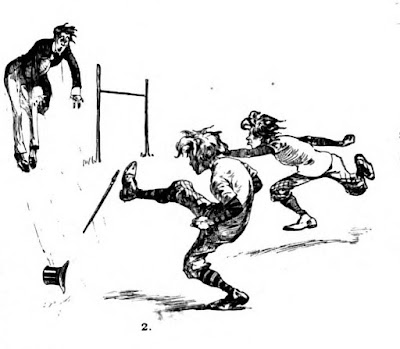 Posted by Peter Jensen Brown at 4:47 PM No comments:

The Evolution of the Dude

Robert Sale Hill’s original “Dude” poem, “The True Origin and History of ‘the Dude,’” suggested that Darwin placed the “Dude” outside of the direct line of human evolution, favoring monkeys as the missing link, as they were “far more bright.”

When Darwin’s theory first saw light,
"The Dude" he tried to think of,
But monkeys being far more bright,
He made the missing link of.[i]

At least one chimpanzee agreed, suggesting that “Dudes” were not a product of evolution, but of degeneration from human form. 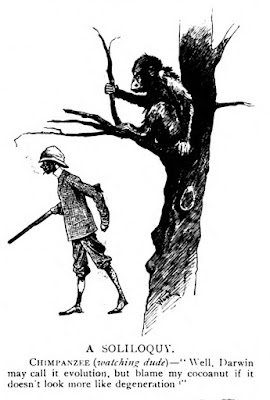 Chimpanzee (watching dude) – “Well, Darwin may call  it evolution, but blame my cocoanut if it doesn’t look more like degeneration.

Monkeys were also portrayed as being able to outwit a “Dude.” 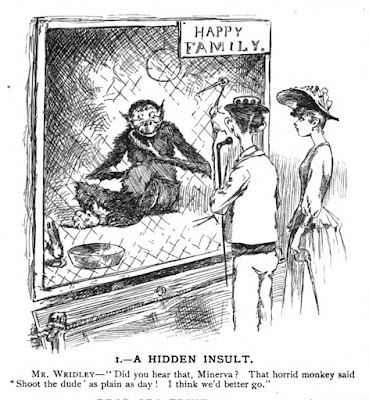 “Mr. Wridley - "Did you hear that, Minerva? That horrid monkey said 'Shoot the dude' as plain as day!  I think we'd better go." 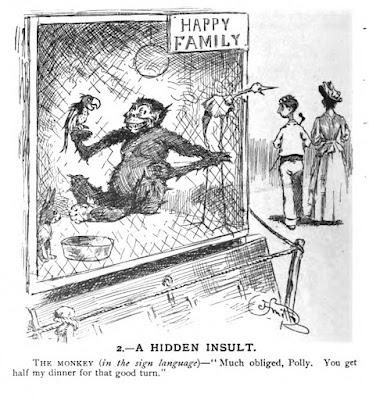 The Monkey (in the sign language) - “Much obliged, Polly. You get half my dinner for that good turn.”

Robert Sale Hill also suggested that the “Dude” was more birdlike than human, “resembling much” and “first cousin to” the Dodo.

Long years ago, in ages crude,
Before there was a mode, oh!
There lived a bird, they called a "Dude,"
Resembling much the "Dodo."

Its stupid airs and vanity
Made other birds explode, so
They christened it in charity
First cousin to the "Dodo."

If it resembles a bird, perhaps it evolved from a bird.

The original “Dudes” smoked cigarettes and were nearly as slender.

Their features, first I would explain
Are of the washed-out order–
Mild dissipation, feeble brain.
With cigarette smoke border.

Just take a walk some sunny day-
Be sure the wind’s not high, sir,
For in a breeze they dare not stay
Before they’ve learnt to fly, sir. —

And there in flocks upon the ave
For ladies they’re but slim beaux,
You see them flitting o’er the pave,
With arms—or wings—akimbo.

Their thin, slight build and smoking habits may have suggested an alternate theory of “Dude” evolution. 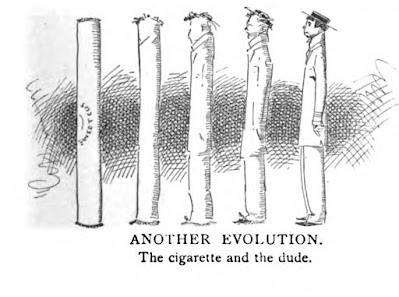 The cigarette and the dude.

And although the original “Dudes” of 1883 wore tight-fitting, skinny-pants, their style evolved over the following decade into wide, baggy, checkered pants. One observer extrapolated the evolution out to the turn of the century, imagining baggier slacks with bigger checks, and a corresponding physical devolution into even smaller and weaker “Dudes.” 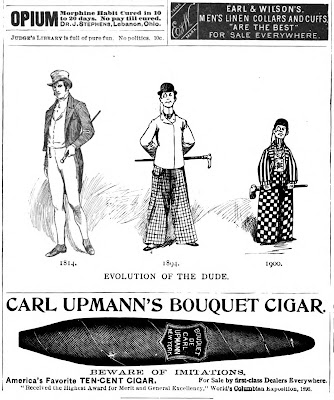 EVOLUTION OF THE DUDE.

With all of the conflicting theories of “Dude” evolution, the humor magazine, Judge, imagined a symposium in which various “distinguished” offered their opinions on “The Evolution and Status of the Dude.”

We have secured at great expense the opinions of the following distinguished people upon the all-absorbing topic of contemporaneous human interest, “The Evolution and Status of the Dude.”  In these days of many symposia this one will easily be awarded the palm for novelty, originality, frankness and general imaginative quality.

E------AW-----r W------x, - The dude was once a man who loved a blush-rose so passionately that he lost his brains in the attempt to express himself.  That is why the dude nowadays halts in his speech, for his language is too profound to run smoothly.  Any attempt at easy and correct conversation ends in collapse or hysteria.

Prof. R. O----n D-----s, Bellevue hospital medical college. [(R. Ogden Doremus, M. D., professor of chemistry and toxicology)] – This is to certify that the specimen of the dude submitted to me was subjected to chemical analysis, and, strange to say, when I got through with him there was nothing left of him.  There was a very minute brown spot left in the chief retort, which under the microscope looked like the chewed end of a paper cigarette, but I won’t swear that even that was left of him. (Please send check when convenient.)

T----s A. E----n. [(Thomas A. Edison)] -  The dude is destined to become the best substance for a carbon substitute in the electric light, and the sooner he is made use of the better.

Dr. J----n H----l, New York university. [(Dr. John Hall, Chancellor)] – The dude enters as a freshman, but by the time he becomes a senior he learns how to classify himself and wilts. Genus Lemuridae, mostly nocturnal, soft wool (instead of brains), and looks best when stuffed.  Some day they will be used by ladies for their hats instead of humming-birds.

E---r S----s. – A youth with flamboyant manner (see Fairhold on Architecture), with an air of eternal sopition (obsoltete – that’s why I use the word) bout him, eyes as opium-soaked as an eastern houri’s (a mixed figure, but one which will give me an advertisement), and a tongue as eloquent as a buzz-saw intent on business.

E. B---y W—l. [(Evander Berry Wall, the reputed “King of the Dudes”)]  – A dude is the noblest work of the tailor, haberdasher, shoemaker and barber.

Darwinists were not the only ones offereing origin stories for the "Dude."  Lewis Frederick Starrett wrote a poem that offeres a creationist theory of the "Origin of the Dude," in which the "Dude" is said to have been created by an "apprentice lad" in "Dame Nature's" workshop.

Dame Nature created the body of the "Dude" without brains, as a perfect human manequin for a tailor.  A mischievous apprentice spoiled her work with a thimble-ful of brains.

She put in his head not an ounce of brain,

And so it followed he couldn't talk,

Nor even be of his beauty vain."

So happened it that her apprentice lad

Into the workshop alone did stray.

He for an apprentice was not unskilled, -

Boys into mischief are easily led, -

His mistress's thimble with brains he filled,

And put them into the model's head, -

Which sprang to being, and Dude was named.

And if you've followed the tale, you'll see

That Nature for him cannot be blamed,

For she didn't mean him a man to be.

He married; for women are found who will

Take dudes for husbands, and oft in life

The brains that wouldn't a thimble fill

Suffice for getting a man a wife.

And the fools who manage to keep well dressed,

Of mincing manner and drawling tongue,

That public places so much infest, -

Their name is Legion, - from him are sprung.

That the story is true, one mus conclude,

Because it clearly teh fact explains,

That wheresoever one finds a dude,

He has only a thimbleful of brains. 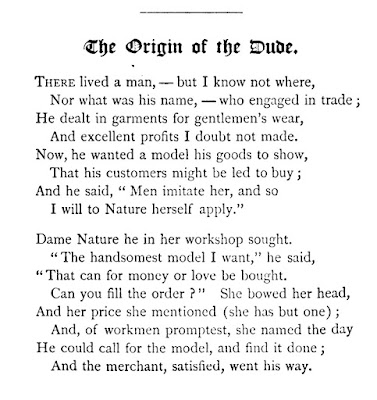 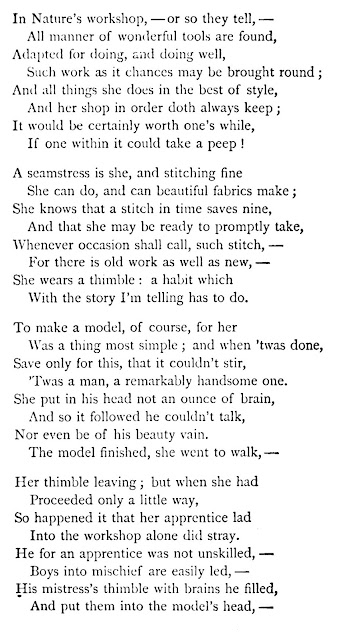 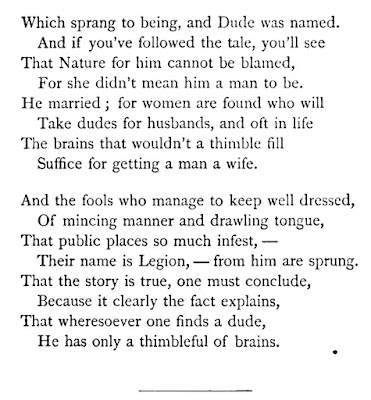 Posted by Peter Jensen Brown at 2:42 PM No comments: